I must have taken hundreds of self-portraits over the last two years or so, but of those attempts perhaps only twenty exist online. I find them extremely difficult to take. When I started it was just a point-and-shoot Olympus that I would cellotape onto a lamp stand and put on self-timer. Running back and forth from it whilst trying to remember how I wanted it to look, for me, was the hardest part. Then there’s the whole self-critical side of it where I would be self-loathing about how I looked. I deleted my self-portrait gallery from my website recently because the majority of them were taken during a period of time in my life that I no longer want to remember or have documented. It is rather funny because during the time that those pictures were taken I was very unhappy and suffered a mental breakdown soon after. Yet the photographs came out okay. Why now when I’m actually in a very happy place I find it so hard to shoot self-portraits that come out the way I’m satisfied with, I don’t know.

This is one of last self-portraits that I took before I moved from Scotland. I was absolutely fucking miserable here, so photographs very much lie. I think at the time I was just trying so hard to present a positive outlook on the outside in the hopes that the inside would do the same.

Shooting self-portraits when you’re female comes with a bit of a bullshit in my experience too. The motives are always portrayed as narcissistic, which has an element of truth in it, because obviously you’re making yourself the subject matter; but for me it has nothing to do with pretty pictures. It’s not about arrogance in the aims to show ‘this is how I look and aren’t I pretty’ nor seeking male attention. I don’t know why some people appear to believe that a woman’s world revolves around what outsiders think of her appearance. My insecurities have always stemmed from my own issues and never from what other people have thought about how I look. That’s essentially how BDD operates. I couldn’t explain why I hate my face and why I struggle with portraits, because it’s so irrational and wouldn’t make sense. What I see isn’t what other people see and that is why so many of my self-portrait attempts have been put straight into the bin.

Choosing to be a model, people would expect you to have a great deal of confidence about your appearance but I haven’t met a model yet that doesn’t have insecurities about that. I’ve mentioned my trichotillomania a few times, which I have been suffering from since the age of twelve. I didn’t seek help for it until my early twenties when I finally had the courage to speak to my best friend about it – I would really encourage anyone else who is quietly suffering to not put off getting help for theirs as long as I did! I wish I’d spoken to someone much sooner. It’s linked to my OCD and Bipolar but unfortunately mine is a form of self-harm rather than just anxiety associated so I’ve felt increasingly more exhausted by it. When I was modelling it was something I could sort of hide but after my breakdown it took hold and I got my hair cut very short. To be honest, it hasn’t helped and I’ve found that it got to the very worst point possible at the end of 2013. I’ve been feeling like I needed to do something very drastic about it, and after twenty years of wearing it like a very visible scar, I figured it was time to just do it!

I was up in Glasgow at the weekend on a shooting trip and after a bottle of wine I talked my best friend into shaving my head. I wasn’t drunk and I didn’t wake up the next day regretting it. It was more the fact that I was with someone I trust and someone who knows how much I hate my trich and how much it effects how I feel about my appearance. So I now look like this! – 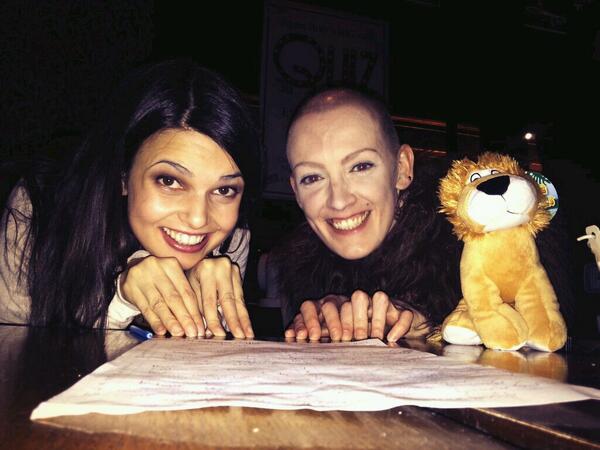 (I’m always going to look like an ogre next to the stunning Zoi anyway, regardless of hair or lack of!)

I have to say as odd as it feels to have no hair and as much as it makes me feel less feminine, to not be able to physically pull my hair out for the first time in twenty years is a great feeling! 🙂 I have a whole self-portrait series planned for this year with the intention to exhibit it, so documenting what happens now will be very interesting. I was out today experimenting and road-testing a camera for that project, which didn’t turn out very well or I would have some images to post!

Instead I can share what I caught in Glasgow, whilst I was up shooting the beautiful and super lovely Zoi.
You can view her website here – http://www.dreamingofzoi.com/

I used my expired black & white Impossible film which I am so pleased to say came out very grainy and lovely. I’ve noticed the expired formulas always have three panels of varying darkness/lightness on them. The first time it happened with an expired pack, I thought it was down to the film lying on it’s side or something; but clearly it’s a chemical separation thing. I don’t know to be honest, but I really like it.

Here are some of the images. These are all taken on a basic Supercolor box camera, no flash and one light on Zoi.

And I also shot some of the new Color 600 formula with coloured frames, which was fun. 🙂